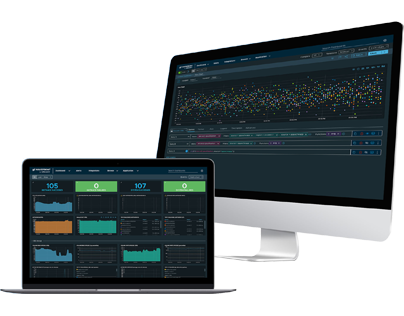 As the design lead for operations software at VMware, I oversaw many different products in the space, but the Wavefront product was special. Wavefront was acquired in mid-2017 and integrated with the core VMware business by the end of the year. Wavefront had never had a UX designer on staff, but that was one of the many things they were looking to change under the new VMware ownership. As I rolled off the Log Intelligence product, I was assigned as Wavefront's first designer and immediately tasked with a complete redesign of the core feature set: Dashboards.

Wavefront had initially been built on the FlightJS platform and they had rolled their own SVG charts which leveraged D3, but due to performance and scale issues, they had decided to migrate to a more modern React platform utilizing custom charts built on Canvas. They could've just done a straight port of their version 1 design, but instead wanted to leverage the opportunity to improve the product. I worked with the product and engineering teams to refactor and enhance the dashboarding framework, so they'd not only be able to compete in that space, but they'd also have a solid foundation that could be extended for years to come.

Over time, we expanded the design team and the scope of feature work. I also guided other designs for refactoring of alerting features, as well as entirely new features for distributed tracing and Kubernetes support.